Counting On, Episode 3.4 Reviewed: You Will NEVER Escape…NEVER!! 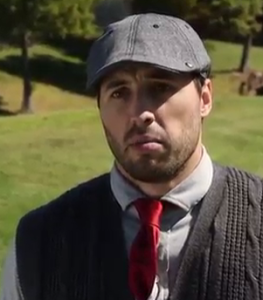 We’re in for one hell of an episode today, readers.

Just kidding. It’s the one of the most inane and dull episodes ever….which is saying a lot, considering whole episodes have focused on grocery shopping expeditions and babysitting.

In a brief update before we begin: Benessa gave birth to (thankfully!) a second son early Monday morning. Looks like Jessa still won’t have a mini girl-slave to raise her kids/husband for her for at least another twelve-to-eighteen months. No word yet on the poor sucker’s name (rumors are pointing to Samson Elijah), but it appears that no hospital visit was necessary this time. However, puerperal fever can set in up to ten days after delivery, so she won’t technically be ‘in the clear’ for a few days…not that any of them care to know about the dangers of unsupervised home births.

But let’s be real, I’ve been more eager for an update on Pokemon Go than on the Duggars punching out another genetic drone. Let’s just get to the mind-numbing non-plot of the day…

So Jessa and Ben are COINCIDENTALLY getting the gender of their baby via 3D Ultrasound on today’s episode. Jesus Christ, the Jim Bob Publicity Timing Machine is in sync with the core of the goddamned universe. If I didn’t know any better, I’d say he planned for the timing of the entire season to line up with Jessa’s due date….that is, to say: he totally did. In fact, the episode we meet Austin will likely be following a same-day engagement announcement. It’s a formula, and it’s given His High Heinyness three seasons of paychecks so far.

Ultrasound happens. Jessa is on mum orders from Jim Bob to create tension.

Guys, that took me thirteen words. It took the show five solid minutes.

I want to die.

Female senators are being silenced by the white male GOP majority, effectively rendering entire states unheard. A batshit Nazi blogger is pulling the puppet strings of a President who won’t even read one page of a country-altering order before signing it. ISIS is gaining strength thanks to our crazy fuck leader’s Muslim ban. The new leader of the US’ Education Department is living proof that you don’t have to have a brain in order to control the collective mind power of an ENTIRE GENERATION…but by God, if having plenty of fifties to wipe your ass with doesn’t qualify you! Meanwhile, it’s easier to get heroin than healthcare, my vagina automatically disqualifies me from having any sort of credibility in politics, the world hates America so damn much, and THE GODDAMN FUCKING BEES ARE DYING!!!!

But what does TLC think we want to see???? HUH??? HUH??? A FUCKING ULTRASOUND THAT LOOKS LIKE JESSA IS GIVING BIRTH TO THAT WHISPERY KID FROM THE MIDDLE IF HE WAS FATHERED BY GOLLUM!?! FOR FIVE SOLID MINUTES OF AIRTIME, WHICH MEANS THE EPISODE HASN’T EVEN WARMED THE FUCK UP!!!!

Okay…excuse me. I need to take a handful of tranqs. Mmmmm…..it soothes.

So Jingeremy is having a bachelor/bachelorette weekend before the wedding. I’m sure a Duggar bachelor party includes lots of debauchery, like the guys seeing strange womens’ ankles as they slowly shuffle across a barnyard stage to serve them birch beer. Party hardy. 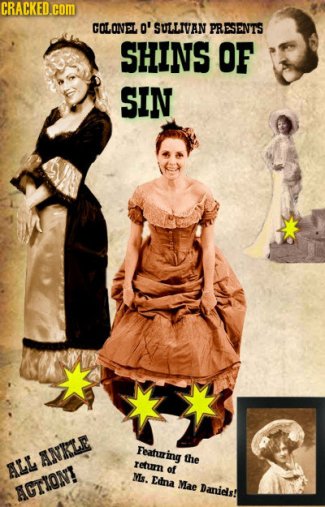 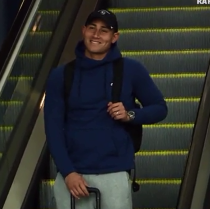 They go to pick up Jeremy’s bros from the Fayetteville Airport Escalator, complete with shit-eating grins that they get to be on trashy TV. Some of these guys are the same schmucks who helped arrange the proposal. The fact that this didn’t trigger a twenty-minute flashback montage is a blessing. The group explains that they plan to have the worst fucking bachelor/ette weekend ever, adhering to all the ‘jender’ roles possible (i.e. sports for men, pretty foo-foo girly sitting down shit for womuns). They brag about their holier-than-thou convictions regarding dance (which is in the Bible as being a good thing) and alcohol (which, as I recall, Jesus himself promoted the consumption of) and how they totally aren’t missing out on anything because they’re so much goddamn better than the rest of us drunk, gyrating low lives, you guys.

Everyone lugs back to The Compound, and I get treated to glimpses of the human equivalent of pre-chewed gum himself, Jim Boob. He doesn’t have any lines, thankfully.

The bridal party pawn off their children on the only competent human in the bunch (Jana) and go to one of those trendy ‘Escape Room’ mystery games. I’m surprised some of the ladies were allowed to go, seeing as learning how to escape from a locked room may threaten the Gothardite patriarchy. Maybe that’s really why they didn’t let Jana go? Can’t have the live-in scullery maid know anything like that.

At least Joy went, probably getting the skills to get away from The Forsyths’ place when she’s sold in marriage to them in a while.

Seth Green’s hobbit cousin gives them the background info on their ‘mystery’ night, talking  about a Spanish conquistador probably bringing smallpox blankets to the Mayans, and if they don’t find his paperwork denying all liability for the ensuing genocide in 60 minutes, a volcano will blow up and smother them all in a fiery pit of oozing red death.

I’d pay TLC cold hard cash if I could actually see that happen.

Of course, because the sexless Duggars have to make everything about vaginas vs penises, the group is divided into teams by male and female. Before I even watch this part, I analyze the teams. The men have a major disadvantage in Derick, who’s dumb as a post and will probably vomit all over the place, and Ben, who’s perpetually toasted. The girls have…well, the Duggar girls, who have no common sense or ability to think for themselves whatsoever. Also, they’d be better off asking the lamp in the corner for clues than have Jill on their team (the lamp is brighter…haha). But Jessa might threaten to kill the others if they don’t ensure her victory, so motivation might be on their side… 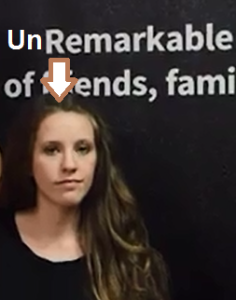 Jeremy says he’s analytical, and I don’t buy it. A truly analytical mind would deduce that he was marrying into a fertility cult before he did so. But in the end, the guys ‘die,’ and don’t solve the puzzles in time to survive the rooms. Ha ha ha.

So as the girls go in to the Doom Room, the guys get to spy on them, because they want to make sure none of them feel the overwhelming urge to make out with each other. The girls ‘die’ as well, but they get significantly more done than the guys, which they reluctantly admit. 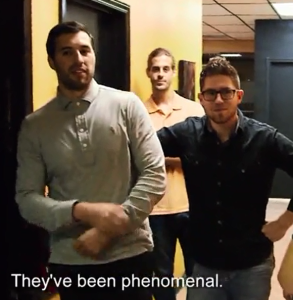 The faces of emotional castration

The next day, the manly men go off to grunt, beat their chests with their fists, and eat raw meat while the girls giggle about kissing and have a feathery pillow fight in their nighties. Oh, by the way, the giggly kissy part isn’t a joke. We’ll get our next round of “Why We Don’t Kiss Before Marriage” schlock. 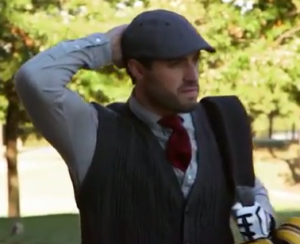 So Super Smart Jeremy decides golf would be a good man-time sport because he’s never played the damn thing before. To compensate for his tiny golf balls, he dresses up like he failed an audition for Newsies. I feel like somehow, in some sub-universe, this is racist to golfers.

The sorry little shit can’t even get his ball two inches away from the tee. I bet if he had his way and not TLC’s he would’ve chosen a semi-real bachelor party sport, like basketball. Or maybe it was the only sport that wouldn’t cause Derick to projectile vomit all over everyone. Meanwhile, the guys begin smacking their balls around so hard, it’s borderline homoerotic. Just kidding, it’s just as lame as you’d imagine. Even after Ben says it takes him 21 strokes to get his ball out.

The Duggars are stupid. This has become a weekly segment. It’s as stale as a piece of month-old bread. 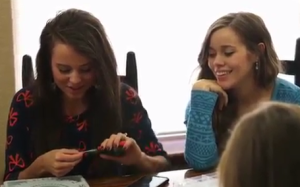 So back at the Compound, we see the flipside of the ‘jender’ stereotyping bachelor/ette weekend, where Jinger and the ladies are making bridal jewelry. Yep, makes sense. During a party weekend meant to celebrate independence while you can, the girls at at home with the kids and making shit. I’m surprised it wasn’t a fucking cupcake-baking party, or a sewing circle. Or a cattle drive.

Okay, it’s amazing how they’re talking about “going left or right” during the kiss. They sound like they’re talking about making two Barbie dolls scissor each other. If they can barely get the mechanics of a five-second dry kiss right, I bet each and every one of those girls’ wedding nights were like putting an IKEA chair together (at least Jill figured it out somehow, as Izzy was definitely a honeymoon baby).

So after that, Jeremy jets home to Laredo. You would THINK the episode ends there, but nooooooo. Jill still has to make at least part of the episode about her, so we’re tortured treated to a final segment where the Dullards go to Derick’s old alma mater, where he was once the mascot, Pistol Pete.

Pistol Pete is the most terrifying mascot of anything since Cookie Monster’s testicles dropped and went to Canada to film PSAs about little kids putting shit in their mouths. 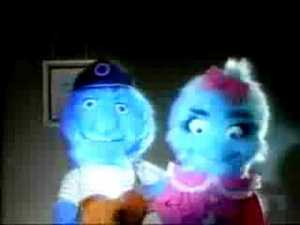 I bet you thought I was exaggerating…

So Derick’s college and his tradition of beheading over sized plastic cowboys connects him to his father, and he gets all sentimental about it. They get all excited about Izzy seeing Derick play 2nd Amendment Johnny, but I already know that they won’t pay for the hundreds of hours of therapy he would need after seeing THAT coming towards him. 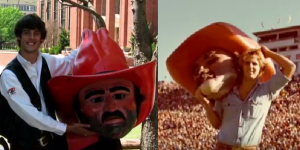 So, after inducing emotional trauma on an 18-month-old, TLC passes it off as cute, and Derick and his mom show Jill the spot where Kathy had to tell him his father died suddenly in his sleep. I’m sure she appreciated such a private, vulnerable moment being broadcast on cable TV for the sake of manipulating a bunch of stupid strangers into feeling sorry for her. It’s such a shoehorned moment. TLC and the Duggars really have no shame.

Next week is the All About Jinger special, complete with all the flashbacks. Ugh. Not sure if I want to review it or take a week off. I’m sure everyone knows how I feel about the clip shows. Help.

8 Responses to Counting On, Episode 3.4 Reviewed: You Will NEVER Escape…NEVER!!